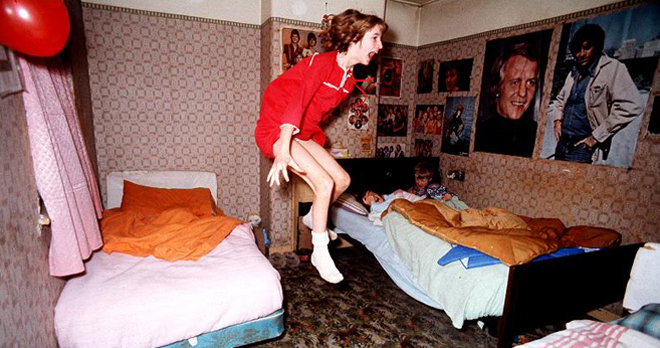 40 years later and the debate lives on

Was it genuine paranormal activity or a sham dreamed up by two mischievous teenagers? The posters on the wall suggest the time. Actors David Soul and Paul Michael Glaser, better known as Starsky & Hutch. The two TV detectives anchor the so-called Enfield Poltergeist firmly in the late 1970s.
Since the Daily Mirror broke the story in 1977, the remarkable events in Enfield’s Green Street became first the best recorded case of paranormal activity in Europe and then, later, almost a party game in that there were insufficient facts to support the continued attention.

No matter. If the reality isn’t good enough, make it up. So there’s been a mini TV series, a blockbuster feature film, several documentaries and if it hadn’t been delayed by the lockdowns of  2020-21 pandemic, another was on the way this time in four parts.
Whatever view you take of the evidence, interest in the case shows no sign of sinking into oblivion. Over forty years have passed since Graham Morris and I made our way to Green Street after the family next door  telephoned the Daily Mirror and told us what was going on.

So far as the world outside Green Street was concerned this was the beginning. It was moved forward by Maurice Grosse, who led a Society of Psychical Research investigation, and Guy Playfair, who wrote a book about it.

On our first visit to the house Graham was hit on the cheek by a Lego brick and his word has never never been doubted. I didn’t see the brick whizzing towards its destination, but I saw Graham’s reaction. I’ve been dubbed a skeptic simply because I never attributed what happened to poltergeists. Strange things did go on in that house and I have always maintained that there are forces on the planet that we can neither measure nor understand.

Graham and I returned on the following and subsequent nights bringing another Mirror report with us, George Fallows whose idea is it was to alert the Physical Research Society. The Mirror remained in contact with the Hodgsons and Graham took some great pictures, including the one above which shows Janet, the younger of the two girls and the one most affected.
Although the three of us were keen to help the family,  we were there to report a story. A piece subsequently appeared on pages one and two of the Mirror on 10 September 1977. Follow this link to see the original, but scroll down until you see the headline ‘The house of strange happenings’.
Our story was something of a breakthrough as it was believed to be the first paranormal tale to appear in the Mirror since 1929 when the paper was famously duped by the charlatan psychic Harry Price at what he said was the most haunted house in England, Borley Rectory near Sudbury in Essex.

It kick started a media frenzy that turned a genuine paranormal investigation into a farce that eventually led to a number of documentaries.

Four months after Sky’s mini series ‘The Enfield Haunting’ was aired in the UK in 2015, filming started in California on ‘The Conjuring 2: The Enfield Poltergeist’, allegedly based on the experiences of the American ghost hunters Ed & Lorraine Warren. Filming switched to London two months later.
Described as a ‘supernatural horror film’, it was directed by James Wan, the man responsible for an earlier film logically called ‘The Conjuring’ which was also inspired by the Warrens.
While the sequel’s locations in Watford, Maida Vale and Marylebone Station had nothing to do with reality, they worked well in that the 1970s retro material was convincing.  For authenticity, Janet and Margaret Hodgson were flown to California so that the actresses Madison Wolfe and Lauren Esposito could meet the  characters they were playing.

But the film, released by Warner Brothers on 10 June 2016, didn’t confine itself to what happened, a blockbuster feature film demands much more and the big money involved means they’ll get it.

Janet and her sister later admitted to some fakery, but there is no doubt that unexplained things happened in Green Street, although not to the extent that TV mini series or feature films might have you believe.
The last attempt to introduce some unbiased logic was a book published in 2019: The Enfield Poltergeisit Tapes (pictured right) written by Dr Melvyn Willin who was the custodian of the recordings relating to the case. Have a read and make up your own mind.

the goings-on at Green Street 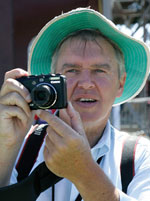 Graham Morris went on to

asked about that Lego brick 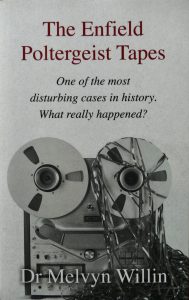 tries to get to the bottom of