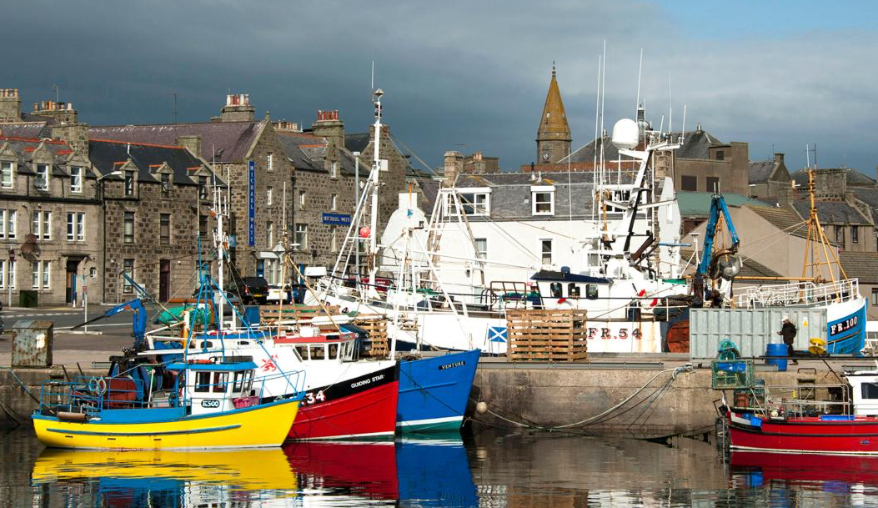 How Nilsen controlled his own legacy

A three-part series on mass murder Dennis Nilsen is currently running on BBC2, but this one is different in that as well as adding new material, it approaches the case from a gay point of view.

Nilsen spent the second half of his life in prison. The first half helped turn him into the monster he became: troubled teenager in Fraserbugh (pictured above), army chef, probationary police constable, civil servant and serial killer. What people know about or remember is 1983 when he was arrested after blocking his drains in attempting to dispose of three of his victims by flushing parts of their remains down his lavatory.
There have been other serial killers since, notably Dr Harold Shipman, the Greater Manchester GP convicted of murdering fifteen of his patients, and builder Fred West, whose sexually-motivated killing spree involved the rape and murder of an unknown number of women in Cromwell Road, Gloucester. Both men committed suicide, Shipman in his cell at Wakefield prison, and West before the twelve murders of which he was accused came to trial.
Nilsen, who as an inmate of Full Sutton Prison in Yorkshire died aged seventy two in 2018 following an operation for a ruptured abdominal aortic aneurysm, was the central character in a three-part TV series screened in the late summer of 2020. It starred former Dr Who actor David Tennant and didn’t take too many liberties with the truth.
Any rational thinking person might think that Nilsen deserved the intense pain he allegedly suffered immediately before his gory life came to an end and believe that his demise brought closure. But that is not the case. While it would be inaccurate to say that interest now is as great as it was in 1983, Nilsen is still a name known to those who weren’t born at the time. They may not remember the name, but they know about the killer who boiled severed human heads in a saucepan and blocked his drains while attempting to dispose of his victims.

How the Daily Mirror broke the story

Far from bringing an end to the case, yet another TV documentary is in production and is expected to be transmitted in the middle of 2021. The reality is that since he was arrested in February 1983 Nilsen has made headlines and continues to do so.
As well as his trial, there were the notes he made which were smuggled out of prison, letters he sent to the curious who had written to him, the Home Office attempts to block a TV interview and who then refused to release any of his private papers, up to four thousand pages of writing.
Why? What is it about the Nilsen case that makes it worthy of continued attention? He was caught, like many killers before and since, because of his inability to dispose of his victims. Although not all of those he killed were homosexuals, his killing raged unchecked between 1978 and his arrest in 1983 as he focussed largely on London’s gay community and the pubs they frequented in Soho and Camden Town. Britain’s attitude towards homosexuals is more tolerant now than it was in the 1980s when homophobia was rampant, institutionally in both the media and the police. The key to Nilsen’s continued notoriety and ability to attract headlines is because from the moment he was arrested and driven to Hornsey police station he was able to control his legacy. Nine police interviews spread over thirty one hours became the basis of the case against him, long passages were read to a packed Court No 1 at the Old Bailey.

Then came the written material smuggled out of prison, the interviews given to writer Brian Masters whose book, ‘Killing for Company’ became the basis of the ITV series, and the letters he wrote to those who corresponded with him.
Almost everything we know about Nilsen came from the man himself, what he told the police or explained to anyone prepared to listen.

Amazingly, no one has ever challenged his words. A handful of graphic incidents from his childhood are only part of the story. Descriptions of his life as an army chef are vague, unconvincing and don’t begin to explain how a homosexual survived in a fiercely aggressive macho, military community. Equally bizarre are the inconsistent and unexplained memory lapses just before what became his next murder. When in the morning after the night before he discovered yet another corpse throttled with the victim’s own necktie, he blandly blamed alcoholic amnesia. That doesn’t begin to tie in with the alleged respect he claimed to feel for his victims, heaving them up from under his floorboards and treating them with reverence.
As Nilsen was only charged with six murders, we will never know how many victims there were. In the TV interview which has a link in the next column he said he made up the number ‘fifteen or sixteen’ just to keep the police happy. While that number was enough at the time to put him in the history books as the biggest mass murder in the annals of British crime, Harold Shipman, convicted of fifteen, but probably responsible for 218 and possibly up to 250 brought an end to that.
Inevitably Nilsen has dropped down the list. In the US, Gary Ridgway confessed to murdering 71 women. American gay killers include John Wayne Gacy with 33 victims, and Jeffery Lionel Dahmer who, with 17, is frequently compared to Nilsen. Andrei Chikatilo, the Butcher of Rostov or the Red Ripper, was convicted of murdering 33 women. Currently at the top of the list in terms of quantity with 138, however, is Luis Alfredo Garavito, or La Bestia, who largely targeted street children in Colombia. He was originally sentenced for 1,853 years in prison, reduced to 22 after he helped police with their inquiries.
Ridgway was spared the death penalty in a plea bargain in which he revealed the whereabouts of still-missing women. Gacy and Chikatilo were both executed in 1994, the same year in which Dahmer was beaten to death by a fellow inmate in the Columbia Correctional Institution.

Part of the Channel 4 interview

with Nilsen that the Home Office

unsuccessfully tried to ban. Transmitted in 2010. Not for the squeamish

to the murders of:

between July and October 1980;

He was further charged with the attempted murders of: